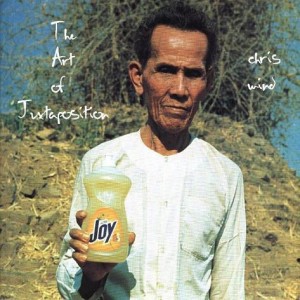 “A cross between poetry, performance art, and gripping, theatrical sound collages. … One of the most powerful pieces on the tape is ‘Let Me Entertain You.’ I sat stunned while listening to this composition.” Myke Dyer, Nerve

“We found that the music was unique, brilliant, and definitely not ‘Canadian’. Chris Wind is a very talented individual. We were more than impressed with the material. The Art of Juxtaposition is filling one of the emptier spaces in the music world with creative and intelligent music-art.” rejection letter from a record company

More reviews below.
“I am Eve” presented on WLRN’s #55 podcast (November 05, 2020).
Women’s Liberation Radio News · Edition 55: A Feminist Analysis of Christianity
See chriswind.net for info re a performance piece using “I am Eve.”
Download all of the tracks (mp3s at 320kbps) in a zip file here (free):
Download album
Free background download: I am Eve

all other performance and production – chris wind

“Weird! And I like it. Take ‘Some Enchanted Evening,’ for example: a horribly mellow rendition of the Rodgers/Hammerstein tune with people being asked the question ‘Where did you meet your spouse? Would you say it was love at first sight?’ on top. One of the replies: ‘I thought he was the most egotistical, self-centered asshole I ever met.’ See what I mean? Wind’s cassette often borders on theatre. ‘Rub-a-Dub-Dub’ suggests that the three men in the tub were gay and goes on to discuss the sexual semantics of putting three other people in the tub. ‘Let Me Entertain You’ is altogether upsetting: between snippets of the song, women describe various social manifestations of the ways women are degraded by men, ranging from child molestation to gang rape. Controversial feminist content. You will not be unmoved.” Bret Hart, Option, Mar/Apr 1988

“I’ve just had a disturbing experience: I listened to The Art of Juxtaposition. Now wait a minute; Canadian musicians are not supposed to be politically aware or delve into questions regarding sexual relationships, religion, and/or sex, racism, rape. They are supposed to write nice songs that people can tap their feet to and mindlessly inebriate themselves to. You expect me to play this on my show?” Travis B., CITR

“Wind mixes biting commentary, poignant insight and dark humor while unflinchingly tackling themes such as rape, marriage (as slavery), christianity, censorship, homosexuality, the state of native Americans, and other themes, leaving no doubt about her own strong convictions upon each of these subjects. Her technique is often one in which two or more sides to each theme are juxtaposed against one another (hence, the tape’s title). This is much like her Christmas Album with a voice just as direct and pointed. Highly recommended.” Bryan Baker gajoob1993

“Thanks for the cassette …it really is quite a gem! Last Xmas season, after we aired ‘Ave Maria’ a listener stopped driving his car and phoned us from a pay phone to inquire and express delight.” John Aho, CJAM

“Liked The Art of Juxtaposition a lot, especially the feminist critiques of the bible. I had calls from listeners both times I played ‘Ave Maria.’” Bill Hsu, WEFT

“We have your Juxtaposition cassette and I particularly enjoy ‘I am Eve’. Every time I play it (several times by this point), someone calls to ask about it/you.” Mars Bell, WCSB

“Thanks for the tape…The work is stimulating and well-constructed and politically apt with regards to sexual politics. (I was particularly impressed by ‘I am Eve.’)” Andreas Brecht Ua’Siaghail, CKCU

“We have found The Art of Juxtaposition to be quite imaginative and effective. When I first played it, I did not have time to listen to the whole piece before I had to be on air. When I aired it, I was transfixed by the power of it. When I had to go on mike afterward, I found I could hardly speak! To say the least, I found your work quite a refreshing change from all the fluff of commercial musicians who whine about lost love etc. Your work is intuitive, sensitive, and significant!” Erika Schengili, CFRC

“Interesting stuff here! Actually this has very little music, but it has sound bits and spoken work. Self-declared ‘collage pieces of social commentary’. …At times the contrasts shown are very extreme, which doesn’t mean something bad, it’s just the way I feel about it. And sometimes showing extreme contrasts is very thought-provoking and inspiring.” No Sanctuary 1992

“Chris does indeed possess the art of juxtaposition as she dredges up the problems of the treatment of women, the elderly, Indians, the media, and many others. She somehow fits all of this into the format of nursery rhymes, show tunes, hymns, and so on. Sometimes it makes you laugh and sometimes it makes you nauseous; in any event, you should buy two – one for yourself, and one to send to your congressman. Although the contents pertain to Canada, they most definitely fit the U.S.’s situation as well.” Factsheet Five 1990